I would like to introduce a message from one of the Hibakusyas, Mr. Toshinobu Nishida.

«The world now clearly wants peace and not war, also the improvement of peoples lives. When you are trying to prevent an atomic war, remember what happened in Hiroshima on the 6th of August at 8.15. Do not repeat the tragedy of a nuclear war. Call strongly in your mind, No more nuclear war. Call the whole world to wish for eternal peace.»

But the tragedy has happened again in Japan.

Now we have tenthousends “New Hibakusya” in Japan.Many workers at nuclearplants became ill and died, and most of them have been neglected.

The victims of the nuclear accident in Fukushima are also being neglected. The Japanese government has been forcing them to go back to highly contaminated places by
stopping the support to the victims.

Although more and more people, especially children get ill, the government reject correlation to radioactif contamination. The highly contaminated waste is burnt as usual waste, and the ashes are recycled in building material. The contaminated soil is used as underground for roads and parks.

During the process of dismantling the power plants, the radioactief particles are spread into the air.

The government is spending huge amounts of money for the Olympic Games 2020 in Tokyo and Fukushima. This international event is used to give the false impression as if the Fukushima Nuclear Disaster is over and Fukushima has totally recovered just like Hiroshima and Nagasaki.

Please let me repeat “No War! No Nukes!” “No More Hibakusya!” 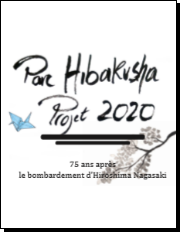